Hello! I see that you have an ad blocker. If you find something useful here and want to support me somehow please consider disabling your ad blocker for this site. It won't cost you anything but will convince me that there's actually useful info here!

Before some days I’d written an answer on HN where I explained as simply as possible how a forward and a reverse proxy is working and what is the difference between them. In this article I’m going to extend this answer a bit to make it a full post and clarify some things even more.

Forward and reverse proxies is an important concept that a lot of technical people aren’t familiar with. HTTP Proxying is a process of forwarding (HTTP) requests from one server to the other. So when an HTTP client issues a request to the server, the request will pass through the proxy server and be forwarded to the destination server (called the origin server). This explanation is true both for forward and reverse proxying.

A forward proxy is used when an HTTP Client (i.e a browser) wants to access resources in the internet but isn’t allowed to connect directly to the public internet so instead uses the proxy.

Usually companies don’t allow unrestricted access to the internet from their internal network. Thus the internal users would need to use a proxy to access the internet. This is the concept of the forward proxy. What happens is that when an internal user want to access an internet resource (i.e www.google.com) her client (i.e browser) will ask a specific server (the proxy server) for that resource. The client needs to be configured properly with the address of the proxy server.

Here’s an image that explains this: 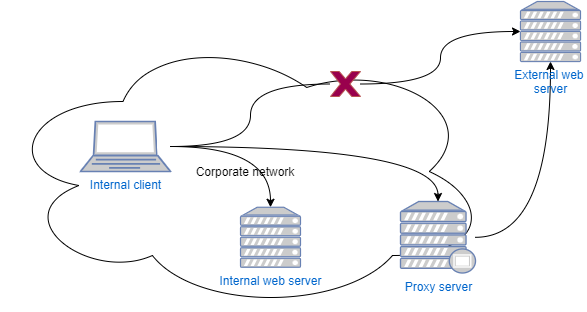 One thing that needs to be made crystal is that the fact that your browser works with the proxy does not mean that any other HTTP clients you use will also work. For example, you may want to run curl or wget to download some files from an external server; these programs will not work without setting a proxy (usually by setting the http_proxy and https_proxy environment variables or by passing a parameter). Also, the proxy only works for HTTP requests. If you are in a private network without external access you will not be able to access non-HTTP resources. For example you will not be able to access your non-company mail server (which uses either IMAP or POP3) from behind your company’s network. Typically, you’ll use a web client for accessing your mails.

So it seems that using a proxy heavily restricts the internal users usage of internet. What are the advantages of using a forward proxy?

Especially the security thing is so important that almost all corporate (or university etc) networks will use a proxy server and never allow direct access to the internet.

A reverse proxy is an HTTP server that “proxies” (i.e forwards) some (or all) requests it receives to a different HTTP server and returns the answer back. For example, a company may have a couple of HTTP servers in its internal network. These servers have private addresses and cannot be accessed through the internet. To allow external users to access these servers, the company will configure a reverse proxy server that will forward the requests to the internal servers as seen in the picture: 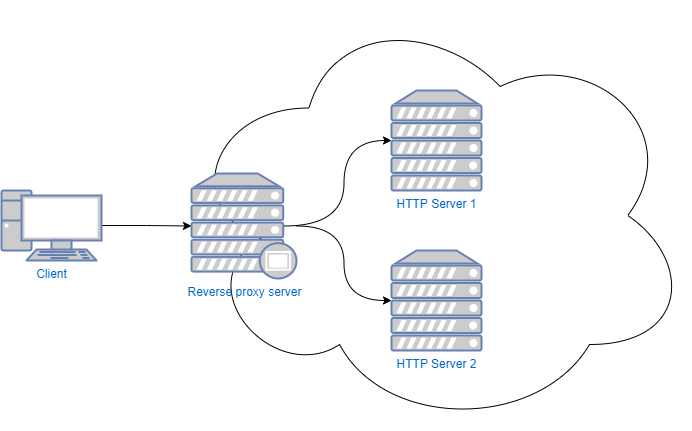 or even other criteria that may be decided.

As can be seen from the previous examples there are a lot of apps that do reverse proxying, for example apache HTTP, nginx, HAProxy, varnish cache et al.

Notice that while there’s only one forward proxy, there could be a (large) chain of reverse proxies when accessing a remote server. Let’s take a look at a rather complex scenario: A user in a corporate network will access an application in another network. In this case the user’s request may pass through: 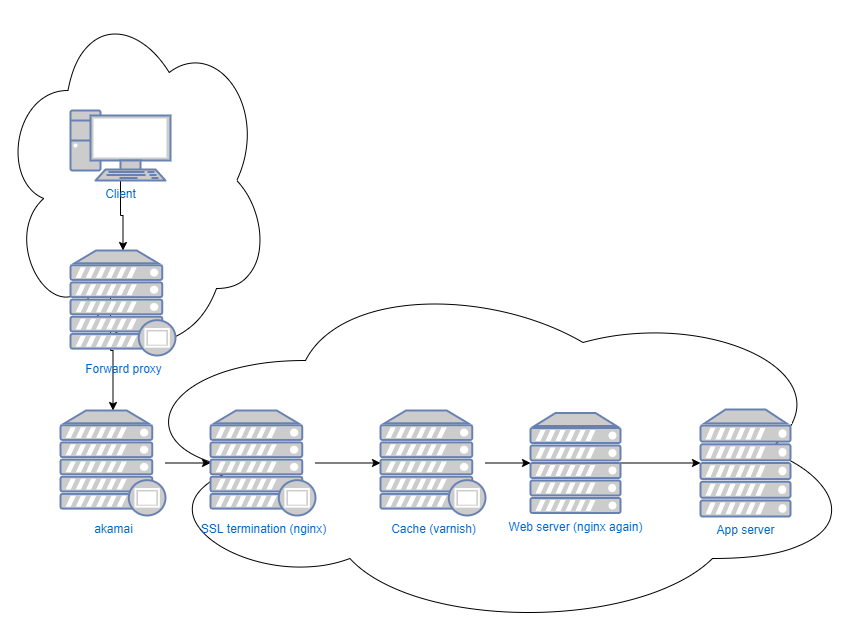 Notice that is this case (which is not uncommon) there are six (05) servers between your client and the application server!

One common problem with this is that unless all the intermediate servers are configured properly (by properly modifying and passing the X-Forwarded-For header) you won’t be able to retrieve the IP of the user that did the initial request.

You can show your appreciation for anything useful you've found here by donating me some bitcoin to this address: